Selma Through the Centuries

A History That Dates Back to Loudoun County’s Origins 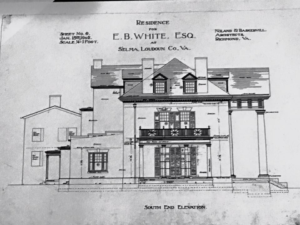 Before they were what they are today, the lands of Selma were a part of the Northern Neck Proprietary owned by Lord Fairfax. In 1741, they were purchased by Ann Stevens Thomson Mason, the widow of George Mason III, who bought 10,000-acres and held onto the land as an inheritance for her children, George Mason IV, Thomson Mason, and Ann Eilbeck Mason.

The southern portion of the property was bequeathed to the elder son, George Mason IV (Father of the Bill of Rights) and became Gunston Hall. The northern part of the property, which includes part of the present-day Selma lands, was inherited by the younger son, Thomson Mason. In 1760, and in addition to his inheritance, Thomson Mason purchased the neighboring 322-acre Raspberry Plain farm that included a smaller mansion and jailhouse from Aeneas Campbell, Loudoun County’s first sheriff. Thomson Mason resided in the Campbell house until completion of the new Raspberry Plain mansion in 1771 at which time the Campbell parcel was renamed Strawberry Plain.

In 1808, Stevens Mason’s second eldest son, Armistead Thomson Mason, inherited approximately 1,000 acres that included a portion of the original Mason Tract and the Aeneas Campbell Tract. In 1810, he built an exquisite mansion at the base of Catoctin Mountain overlooking a sweeping vista of lawn and pastural farmland. The mansion and plantation were named Selma, inspired by the translation of a Gaelic poem by Sir John McPherson with “Selma” meaning “Beautiful Castle” or “Highest Place”.

Over the years the property has been passed down from the Mason family to the Beverleys, Swans, Whites, Eppersons and one ter Maaten, enduring a Civil War raid in the 1860s, a destructive fire in the 1890s, and a top to bottom reconstruction undertaken by Sharon and Scott in 2016 after years of neglect and vandalism.

Due to the rich activity in the area, the Mason family of Selma was inevitably linked to high profile figures in U.S history. Stevens Mason served as an aide to George Washington at the Battle of Yorktown and was a close personal friend of Thomas Jefferson, the eventual third President of the United States.

Please visit the links below for additional information on Loudoun County History:

With Leesburg in Their Sights, Union Troops Caught by Surprise at Ball’s Bluff

A Brief History of Leesburg

Early Settlement and Founding of Leesburg