Influenza Pandemics in the 19th Century

Throughout human history, epidemics have had enormous impact on the civilizations of the world. From great plaques to disfiguring disease, mankind has been at constant war with these invisible enemies. During the 18th century, there were thirteen severe epidemics throughout the world. In the 19th century, there were twelve. Historians and virologists estimate that eight of these were influenza pandemics.

During the 19th century, the United States was hit hard by two separate influenza pandemics. The first broke out in China during the winter of 1830. It spread southwards by sea to the Philippines, Indonesia and India and then onto Russia and across Europe. By 1831, the epidemic had reached the United States, infecting 20–25% of the population. Interestingly, the mortality rate of this influenza was not as high as the mortality rate of Cholera, which was spreading across the US at the same time. This influenza was seasonal and by the winter of 1833, the infection rate had fallen. 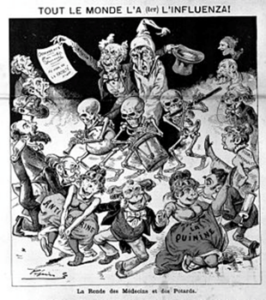 The other great influenza pandemic impacting the US started in Russia in May 1889.  At the time, Europe alone had well over 100,000 miles of railroads and travel across the Atlantic Ocean took less than six days. As a result, this “Russian Flu” virus had spread throughout the entire Northern Hemisphere within four months. In the United States, the first case was reported in early December 1889. A mere five weeks later, deaths caused by the virus had peaked in America.

Worldwide, the mortality rate of the “Russian Flu was estimated at about 4%, far less than the death might have been without “modern” medicine. New chemical compounds were being used to treat flu sufferers. The January 12, 1890 edition of a Paris satirical magazine depicted an unfortunate influenza sufferer accompanied by a parade of doctors, druggists, skeleton musicians and dancing girls representing the latest “miracle” drugs, quinine and antipyrine. As an aside, I find it interesting that today, just as doctors did in 1890, we are experimenting with malaria drugs and treatment therapies for COVID-19.

History is no stranger to global disease outbreaks, and each has taught us something about how to manage their spread and that we apply those lessons today.