A symbol of rebirth and new beginnings. 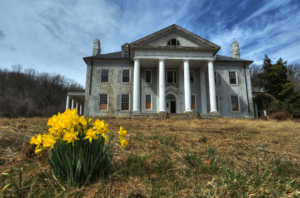 “When we first saw Selma in its abandoned state, it was in the dead of winter. The house itself was cold and near death. On the day we closed on the property, through all the weeds and vines and high grass that covered that lawn and the house, Scott and I noticed daffodils poking through the overgrowth. They were all yellow and hopeful as they danced in the breezes in the sunshine. In that moment, I remembered Wordsworth’s daffodil poem and that daffodils symbolize rebirth and new beginnings. And that is why, for me and my husband, the daffodil became synonymous with Selma’s rebirth.” – Sharon Virts

I Wandered Lonely as a Cloud by William Wordsworth

I wandered lonely as a Cloud
That floats on high o’er Vales and Hills,
When all at once I saw a crowd
A host of dancing Daffodils;
Along the Lake, beneath the trees,
Ten thousand dancing in the breeze.

The waves beside them danced, but they
Outdid the sparkling waves in glee: —
A poet could not but be gay | In such a laughing company:
I gazed — and gazed — but little thought.
What wealth the show to me had brought:

For oft when on my couch I lie
In vacant or in pensive mood,
They flash upon that inward eye.
Which is the bliss of solitude,
And then my heart with pleasure fills,
And dances with the Daffodils.