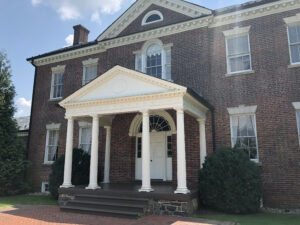 Loudoun County Virginia’s countryside was once dotted with the plantation homes of some of the most influential families in American history.  If the house had a proper name attached, you could bet it belonged to someone of note, or a direct descendant.  An example is the first house on our Masque of Honor historical home tour, Belmont Manor (formally known as Belmont Plantation). The house has led several lives, as most old houses do, and is currently the clubhouse of an exclusive golf resort, but its pedigree is a storied one.

Built between 1799–1802 by Ludwell Lee oldest son of Richard Henry Lee, a founding father from Virginia. Belmont Plantation was sold in 1836 at Ludwell’s death to Margaret Mercer who converted it to a school for girls. Belmont was later bought by then-Kansas governor Frederick Staunton who sold it in 1907 to Pittsburgh attorney John Scott Ferguson, who undertook a few renovations.

In 1915, Ferguson sold the property to Edward B. McLean, son of the publisher of the Washington Post. Mr. McLean built a thoroughbred horse stable and trained horses on the property until 1931.  Incidentally, the McLean family was also one of the owners of The Hope Diamond, a fascinating story for another time.

Patrick J. Hurley, Secretary of War under President Herbert Hoover, bought Belmont from McLean and owned it until the early 60s when it was sold to IBM and used as their management retreat center.  IBM moved out in the early 80s, and sadly the house fell into dire disrepair and neglect.  It was eventually purchased by developers Toll Brothers, who restored and renovated the manor house, making it the crown jewel of the residential development they built around it.

The renovations undertaken by Toll Brothers were thoughtfully executed, maintaining the character and architectural style of the original home.  The main entrance includes a portico with two Doric columns on either side. The first floor consists of a large center hall, and the foyer, which is straddled by two large reception rooms, each with mantels that are said to be gifts from General Lafayette, of Revolutionary War fame, are decorated with paneled wainscoting.  This is very typical of the style of Southern mansions of that time. The only outbuilding of the Manor house that is still standing today is a small, stone smokehouse. The cemetery is on the west side of the manor and holds the grave of Ludwell Lee who died in the house in 1836, though it is disputed as to whether he is actually interred there. He also has a gravestone at Saint James Episcopal Cemetery in Leesburg, VA.

Like most grand houses with a past, Belmont Manor House had a long trajectory as the place to see and be seen.  Built by Ludwell Lee between the years of 1799 and 1802 on land he acquired through marriage to his first cousin Flora Lee, Belmont saw its fair share of luminaries brighten its imposing doorstep.

Ludwell Lee was born on October 13, 1760, the second son of Richard Henry Lee and Anne Aylett, and was steered towards a career in law, the appropriate pursuit of the well-born. Ludwell studied in England and France, where he dealt with the awkwardness that resulted from his father, Richard Henry Lee, being one of the original signers of the Declaration of Independence.  He left the law in 1781 and became aide-de-camp to Marie-Joseph Paul Yves Roch Gilbert du Motier, Marquis de LaFayette (we’ll refer to him as General Lafayette for brevity’s sake.)

After a tenure in the Virginia General Assembly, Lee retired to Loudoun County as a prosperous farmer, hosting some of the most illustrious personalities of the day. President James Madison was a frequent visitor, as well as General Lafayette, who aside from being godfather to one of Lee’s five daughters, made a lasting impression on the citizens of the burgeoning region.

Lafayette fought with valor at many of the most important battles of the Revolutionary War and was made division commander by then-General George Washington. Lafayette was a man who was vetted, trusted and liked by many of the most influential people in American History. Each of these relationships would create bonds that would bring some of the most illustrious back to Loudoun County and to the hearth of Belmont Manor.

According to the newspapers of the time, few visitors to our nation had been received with so much pomp and circumstance as Lafayette. Congress wanted to transport the 66-year-old marquis by a U.S. frigate, but he insisted on paying his own way and that of his son, George Washington Lafayette, and his secretary, Auguste Levasseur. The overriding purpose of the General’s visit was to visit former President James Monroe at his home in Oak Hill, in the outskirts of Leesburg, Virginia, and in the course of this visit, he managed to lay his head on the best goose down pillows in Loudoun County.

Arriving on Aug. 6, 1825, the town of Leesburg exploded in festivities for the General’s entourage, a cannonade welcome and crowds lined the streets, cheering for one of the charismatic heroes of the Revolutionary War. Henry Dwight Sedgwick, Lafayette’s biographer noted: “All the way was like the trail of a comet; a line of coaches, escorts of horsemen, torches by night, bonfires on hilltops, speeches, hand shakings, cheers.”

His assistant Levasseur’s observations of the many young ladies and women who lined the narrow streets, taking special care to describe their festive ensembles: “dressed in white, with blue sashes, and their heads were tastefully adorned with evergreens.”  According to lore, red-headed General Lafayette was quite the charmer.

Lafayette and party found Monroe happily retired at his home in Oak Hill, “pleasantly settled, with all his family, in a handsome house, near his farm. We spent three days in their company, and then the inhabitants of Leesburg, a small adjacent village, came, in company with the Loudoun County militia, to invite the presence of the nation’s guest to an entertainment.”

We are fortunate to have a record of the General’s procession through Leesburg, courtesy of Levasseur’s meticulous notes: “the procession moving through Loudoun, Market, Back [today named Wirt Street], Cornwall, and King Streets” – encompassing most of the town and its 1,500 residents at the time. He then returns to the young ladies of the Leesburg Female Academy who had come out to watch: “The line of young ladies was particularly interesting.” Charmer indeed.

That evening, General Lafayette and company stayed with the Lee’s in Belmont, no doubt thoroughly enchanted with the hero’s welcome they’d received. There still exist sketches from that visit, currently in a downtown Leesburg office building that once was the home of the Mayor of Leesburg during the time of the auspicious visit. Ludwell Lee died on March 23, 1836, at Belmont, and was buried in Saint James Episcopal Cemetery in Leesburg.  His obituary mentioned his service and fortune, his career and his friendship with those who helped form the landscape of our national history.