History of the U.S. Supreme Court 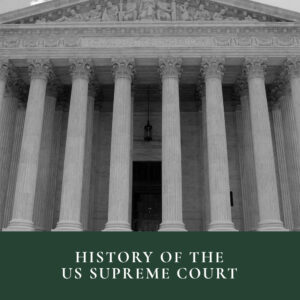 The United States Supreme Court was established on the 24th of September, 1789, when the Judiciary Act was signed by President George Washington and passed by Congress. The Supreme Court was to be a tribunal of six justices, who would serve until death or retirement.

The functionality of the Supreme Court was established by Article 3 of the U.S Constitution, which dictated that the Supreme Court of the United States has ultimate jurisdiction over all law, especially with regards to the constitutionality of all U.S law. The Court was given the power to check the actions of the executive and legislative branches of government; the executive being the president, and the legislative being Congress. The Supreme Court is therefore the highest federal court in the country and the head of the judicial branch of government.

As dictated by the constitution, the supreme court was organized by congress and its members nominated by the President of the United States. In assembling the first Court, President George Washington nominated John Jay as chief justice, and as the five associate judges, he nominated John Rutledge, John Blair, William Cushing, James Wilson and Robert Harrison. All six nominations were confirmed by the United States Senate on September 26th.

The number of Supreme Court seats altered six times before Congress settled upon the nine seats we know the Court to have today.

The Court’s first meeting was held in New York City during the February of the following year, however, it did not hear any cases its entire first term. Instead, the early meetings were focused on working out official procedures.

From then on, the justices met twice a year in the national capital, which was first New York City and then went on to become Philadelphia during their time. Before the law exclusively required parties to appear before a sitting judge the justices had circuit riding duties. This meant that the justices would travel or “circuit” a judicial district in order to hear cases. Each justice was designated one of three circuit routes, which they traveled to hold and attend meetings.

Since its establishment, The Supreme Court has made considerable and essential changes to the laws and practices of the country. It has seen cases that questioned the constitutionality of racial segregation (Brown v Board of Education) and expanded civil rights (Gideon v Wainwright).

Today, the Supreme Court hears about 150 cases and reviews about 7,000 cases a year.

All About Our Federal Courts

George Washington and The Supreme Court