The Battle of New Orleans

A Battle Between the American and British Armies 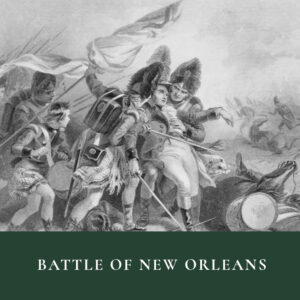 The Battle of New Orleans was fought on January 8th of 1815, after an unfortunate delay in communication. Though the War of 1812 had technically been resolved in the signing of the Treaty of Ghent on December 24th of 1815, the news was slow to reach the United States and therefore could not prevent the brewing battle.

The Battle was fought between the British and American armies, over control of New Orleans – the British under Major General Sir Edward Pakenham and the US Army under Brevet Major General Andrew Jackson. Following the victory in defeating Napoleon earlier that year, Great Britain expected an easy conquest, and launched an invasion on the American city, hoping it would be the last piece of the War.

The plan to invade New Orleans was instituted because of the city’s crucial seaport. The British realized that if they got hold of Crescent City they could dominate the Mississippi River and seize control of trade in the South.

Reports of an imminent attack reached the U.S and Major General Andrew Jackson rallied to the defense of New Orleans. He ordered every weapon and every able-bodied man be brought forward to fight in defense of the city, collecting a group of 4,500 men from all walks of life: from aristocrats and militiamen to freemen, Choctaw tribesmen, and pirates. This army of 4,500 was to fight against about 8,000 British men.

On December 23rd, Jackson launched an attack on British forces at night whilst they were unprepared and without cover. He then retreated to Rodriguez Canal, and built the canal into a defensive trench, using dirt to build a seven-foot embankment that stretched about a mile wide. ‘Line Jackson’ as it was called, ended just before an almost untraversable patch of muddy land.

Meanwhile, the British Lieutenant General Pakenham had planned a two-pronged frontal assault. He sent out a force to seize American artillery which he planned to turn on the American side. While this was happening, Pakenham planned to send 5,000 men to charge at and destroy Jackson’s Line.

On the morning of January 8th, Pakenham put his plan to action, but the British advance was met with Jackson’s artillery. While the main force attacked, the British also attempted their second-part attack along the riverbank. They overwhelmed the American defenders, scattering them with their fire, but the shooting of their commander, Colonel Robert Rennie, led to a retreat on the British side. Meanwhile, Pakenham’s attack had also failed. The fog he had been relying on had cleared, allowing the Americans, who were particularly skilled shooters, a clear view. Pakenham’s plan unraveled and after he and other officers were shot, the British retreated.

The Battle of New Orleans resulted in about 2,000 British casualties, while the US side lost fewer than 100 men.  The victory won Andrew Jackson great fame as he was venerated as an American war hero.