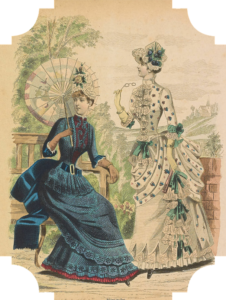 As is the case with fashion today, the styles of the 19th century were ever changing. Each decade experienced a different trend or popular style of dressing, every varying change slowly adding up to the predominant 19th century style that we are used to seeing in books, paintings, and films today.

At the beginning of the 1800s, the fashion was very much of the previous century. Styles sought to replicate classic Grecian dresses in a neo-classical style, and were therefore plain in color, free-flowing and fluid. With the arrival of the romantic era, outfits became grander, more decorated and complex. Dresses, which were previously narrow in the front, began to have a fuller back, and the clinging skirt transitioned to the fashionable bell-shaped silhouette. A full skirt became largely fashionable, and women would wear many layers of petticoats to fill them out.

When the underskirt hoop, or the “cage crinoline” was introduced in the 1850s, it was ardently welcomed by women; the cage relieved them of the weight of the many underskirts while simultaneously expanding skirts to their maximum fullness. These hoops were affordably priced and were therefore worn by women in all walks of life.

With the growing skirts also came growing sleeves, and an increase in padding and other three-dimensional effects. The waistline, which had initially been tucked just underneath the breast, was lowered back down to its natural place, and was often cinched with a belt. It was here, that we begin to see the 19th century version of an “hour glass” figure, as well as significant increase in the use of color and print.

During this time period, people wore different outfits depending on the time of day and the occasion. For example, longer sleeves and high necklines were worn during the day, whereas shorter puffy sleeves and lower necklines were reserved for the evening. When it came to hats, bonnets were to be worn outside, and linen caps inside.

Of course, an outfit is never complete without a good hair style. Starting in the 1820s, women’s hair styles began to be more complicated and elaborate, so hats were adjusted and designed accordingly. Hair was often styled with a middle parting and ringlets at the sides, or was swept back from the face in a bun and held in place by a net or a snood.  Through the varying changes in fashion, the century’s fashionable hair-do’s remained on top of the head and were often decorated with a small hat and a loose ringlet or two about the face.

The century endured many more sartorial quirks and changes than I could list in one post; the popularization of aprons and cloaks, a slightly gothic era in the 40s, the shift toward skirts over dresses in the 60s – and I haven’t scratched the surface of menswear. It’s safe to say that fashion has always been as fascinatingly capricious as it is today, and that even in the 1800s, it sure did not sleep.