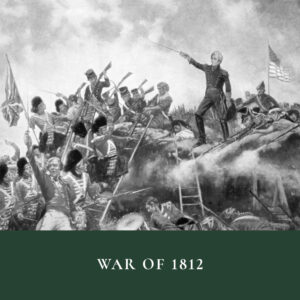 The War of 1812 has little written about it – it certainly has not registered in our collective consciousness the way the Revolutionary (1775-1783) and Civil Wars (1861-1865) have lived on in countless movies and plays in the century since the last shots were fired.

In the final analysis, it seems that the rationale for the War itself doesn’t resonate today – upholding maritime rights and invading Canada seem like objectives at odds with each other when viewed in hindsight.

Unhappy with the fact that there were restrictions on our trade with Europe, we thought we would conquer Canada to force concessions on the maritime front, which ended up looking like land greed to Canadians. The war is universally considered to have ended in a draw, but in reality, our military was woefully unprepared for battle and officers were not trained as they should have been. Canadians on the other hand, were well trained and had Native American allies to help in their cause. All of this, plus the limitations of communications when waging a war in a distant land, led to what is really a defeat for Americans: Not a reality that was particularly pleasant for American citizens at that time.

The one significant episode of the war that did garnish attention was the burning of The White House in August of 1814, in retaliation for the American attack on the city of York in Ontario, Canada.  Though president James Madison and First Lady Dolley had already left for safety, the soldiers allegedly sat down for a meal on White House china before ransacking and setting fire to the mansion.

The anecdote that HAS struck in the public consciousness however is the first lady’s rescue of the full-length portrait of President George Washington.  As White House staff looked out the window with spyglasses, Mrs. Madison had the portrait frame cracked (it was screwed in to the wall) and the portrait rolled up for safe transport. Incidentally, the entire city of Washington D.C. was NOT burned, their targets were The White House, the Capitol, and the treasury and state department. This, along with the standoff at Fort McHenry, was the inspiration for the writing of The Star Spangled Banner.