History and Heritage of the United States 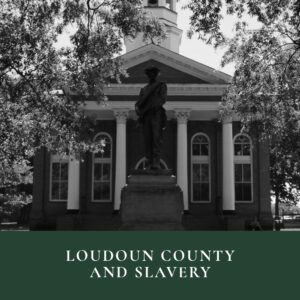 Since its beginnings, in 1709, Loudoun County grew and prospered as a direct result of the blood, sweat and tears of the people whose lives were bought and sold as a matter of course.  By the mid-1750s, Loudoun recorded “about 500 Negroes”, about 22% of a total population of 1,800.  Absentee landlords from neighboring counties owned about 70% of slaves.

Considered property, any African Americans born in Loudoun County were first and foremost baptized, and as was customary among the enslaved before 1860, they were not given a recognized surname.

By 1773, the population of Loudoun County had grown to 11,000, among them 1,950 slaves or about 17% of the population, which fell within the norm for neighboring counties. By 1782, an increase in conflicted feelings about slavery allowed county courts to grant freedom to the enslaved if they met their criteria, but it also provided that any freedman who helped another flee bondage would return to enslavement themselves.

By 1800, Loudoun registers its largest slave population to date, 6,078 people, or 28% of the population. But unrest in the county persists, with Quakers and Methodists defying the church’s officially neutral position and hosting extensive anti-slavery discussions.

In 1816, The American Colonization Society is established in Loudoun county, with prominent members of society as founding members, including Charles Fenton Mercer and President James Monroe. Its goal was to free slaves and transport them to Liberia, where it was assumed they would assimilate and feel at home. (Regardless of what individual progressive and status quo preserving opinions might have been on the subject of slavery, it was still illegal to teach slaves to read and write). Ludwell Lee of Belmont Manor, and the Reverend John Mines of Leesburg Presbyterian Church, lead the Loudoun chapter of 70 men.

However well intentioned, the underlying concern always remained how this would ultimately benefit the white man, so a less acknowledged aim of this program was to make sure that competition for available jobs in the county remained between white men only. Additionally, by 1843, most of the freed slaves “rehomed” in Liberia had been born in the United States so they were unable to adjust to their new “home.”  Census records of the time show that only 4 of the 30 immigrants sent to Liberia remained there. The rest had died of “African Fever” within the first year of their arrival.

Schooling became an issue as children of freedmen and white men needed to be educated (naturally the former was a matter of debate in the white community and the latter a necessity in their own estimation) and Loudoun County remained woefully unprepared to accommodate them.  Loudoun had 75 schools available but they were only open for 70 days a year.  In 1846 Virginia passed a bill that allowed each county to open a public school if two-thirds of the voters agreed.  Loudoun County, in spite of being in dire need for more schools, voted against the measure for fear that these schools would be integrated.

Slave insurrection such as Nat Turner’s revolt prompts the Virginia legislature to pass laws that forbid both slaves and freedmen to assemble for the purpose of reading, writing or listening to a preacher.

By 1844, there are signs that sentiment is beginning to turn against slavery.  Not purely from a humanitarian standpoint, but also from a pragmatic perspective, with arguments being made in favor of the “superiority of free labor.”

By 1845, the county was definitively divided.  The chasm continued to grow and was most visible in the two Methodist Churches in Loudoun at the time.  Northern Methodists in Leesburg were anti-slavery and the Methodist congregation of Middleburg was pro-slavery;  this was a clear indication of the turbulent mood in the area.

By 1856, Benjamin Drew’s book, The Refugee, compiled from interviews of escaped slaves, with vivid descriptions of living conditions, whippings and other degradation further impacted the mind frame of those who were already awake to the evils of the practice.  Ordinary citizens such as Yardley Taylor, a Quaker map-maker and U.S. mail carrier, helped countless slaves in Loudoun County escape and earned himself the title of “Chief of the Abolition Clan in Loudoun.”

Incidentally, the largest slave owner in Loudoun County was Elizabeth Carter, owner of Oatlands in Leesburg and Bellefield Plantation near Upperville.  She owned 133 people at the outset of the Civil War.  As was common practice at the time, some workers were hired out and families were often split—most of the time their stories were lost to history or even to their closest relatives.  (In order to assist descendants of those who may have worked at Oatlands, the organization has opened an interactive website exhibit that allows people to search a comprehensive database of those working for the Carter family—and find individual stories about their ancestors.)

As the unrest continued and the nation moved steadily towards Civil War, prices for slaves began to fluctuate wildly, but Loudoun remained stubbornly pro-slavery.

Once the Civil War erupted, small numbers of slaves served in both the Union and Confederate armies, but in roles that had them cutting hair, handling horses or on mess duty. All were freed after the Emancipation Proclamation took effect in January 1863, but most remained anonymous in their service, and their sacrifices lost to history.

1865 brought the establishment of The Freedmen’s Bureau to Loudoun County, with headquarters in Leesburg and Middleburg to help educate and protect freed black citizens and help them adjust to living in a free society.  The following year, Leesburg black men formed a “Colored Man’s Aid Society” to assist the infirm and indigent.  The Democratic Mirror, a prominent Loudoun County newspaper went on to say:  “The negroes of this community are, as a general thing, polite and well behaved.” The inherent racism in the community as a whole was so ingrained that even when well-intentioned, such as an obituary notice in 1887, “…tis true he was of the colored race, but his life was actuated by principle as white and as pure as any man’s” the unconscious need to infantilize and condescend remained. It was not uncommon for newspaper articles to address black men and women as “Aunt” and “Uncle” rather than “Mr.” or “Mrs” well into the beginning of the 20th century.